A Renewable and Non-Polluting Energy Source

Wind energy is a completely renewable and non-polluting energy source with minimal environmental impact, adding no new air or water emissions. Once wind generation equipment is in place, the ongoing costs of producing wind-based electricity may be less than other technologies. Of course, wind generation is not constant and cannot replace base-load generation technologies, but wind energy does help reduce our reliance on fossil fuels and helps secure our energy independence.
How Does It Work?
Wind energy is generated by using the movement of air to turn the blades of a wind turbine mounted more than 200 feet above the ground. The rotation turns a generator, converting the wind into electricity.
When the wind blows strongly enough, the two or three blades of the propeller turn, spinning a driveshaft connected to a generator housed inside the turbine. Power generated from all the turbines in a wind farm is fed into the electric grid through transmission lines.
An onboard controller measures the wind speed and starts the turbine when winds are around 10 mph and shuts the turbine down if wind speeds rise above 55 mph to avoid damage to the turbine.
The typical wind turbine is about 315 feet above the ground or taller than the Statue of Liberty. Each blade is more than 160 feet long and weighs about seven tons. Building a base for a single turbine requires 40 truckloads of concrete and 35 tons of reinforced steel. 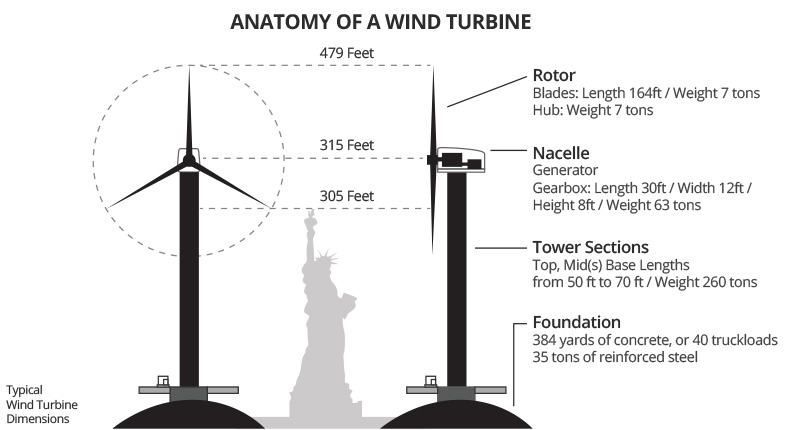 Where Is DTE Energy Putting It to Work?
Since early 2007, DTE Energy has acquired wind development rights on more than 100,000 acres of land on the east side of Michigan. The first DTE Energy-owned and constructed wind parks were commissioned—connected to the grid and generating power—in December 2012. Two of these wind parks are located in Huron County and one in Sanilac County. Together, these three wind parks have the capacity to produce 110 megawatts per hour of renewable power on nearly 15,000 acres of land. DTE’s fourth wind park—the Echo Wind Park in Huron County—became fully operational in September 2014 and has a generation capacity of 112 megawatts, which is enough to power more than 50,000 homes.
Government-funded studies have shown the wind speed at 230 feet above the ground to be 16-18 mph greater on the eastern side of Michigan than elsewhere in the state. These are some of the strongest on-shore winds within the state of Michigan.
DTE Energy also has wind farm installations in Missaukee, Tuscola, Bay, Saginaw, Gratiot and Delta counties.

How Does Wind Power Benefit Communities?

Fewer Greenhouse Gases
Wind energy benefits everyone by reducing emissions from other generating technologies while providing electricity to the grid.
Increased Use of Renewable Energy
While winds may not always blow, wind is always available as a resource for generating electricity, allowing DTE to include wind power as part of the company's portfolio of renewable energy sources.
Stronger Local Economy
Property owners, whose land becomes part of a wind park, receive annual lease payments for their land, putting money back into the local economy. After installing generating equipment, including wind turbines, about 95 percent of the land is still usable for agriculture, allowing farmers to use the land while generating power for the community. Cities, counties and municipalities also receive tax revenue from the wind park, helping to pay for useful public services.
Installing and maintaining wind parks also creates jobs, helping to sustain local businesses by putting residents to work.

The U.S. Department of Energy has more information on how wind power works, including animated graphics showing how the movement of the wind can power homes and factories.
Students and teachers can find out more by visiting the Energy Kids Renewable Wind at the U.S. Energy Information Administration.